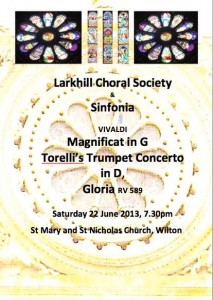 The concert was performed in the beautiful Italianate church in Wilton where we were joined by three soloists and a sinfonia of 9 musicians.

This programme was focused on two works written in about 1715 by Vivaldi (1678-1741).  The Gloria featured in this performance was uncovered by Alberto Gentilli in the 1920s among 27 volumes of sacred pieces that had been lying forgotten after Vivaldi’s death.

We started with Vivaldi’s Magnificat RV 610a in G minor and continued with Torelli’s trumpet solo work, concluding with Vivaldi’s Gloria RV589 in D minor.