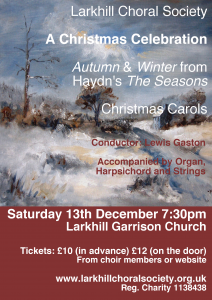 Haydn ‐ Autumn’ and ‘Winter’ from ‘The Seasons’ plus Carols

This concert was framed around Haydn’s Seasons followed by Carols and conducted by our new Director of Music – Lewis Gaston.  Haydn wrote The Seasons following the great success of his previous oratorio The Creation (1798), which had become very popular and was performed all over Europe. The libretto for The Seasons was prepared for Haydn, just as with The Creation, by Baron Gottfried van Swieten, an Austrian nobleman who had also exercised an important influence on the career of Mozart. Van Swieten’s libretto was based on extracts from the long English poem “The Seasons” by James Thomson (1700–1748), which had been published in 1730.

The oratorio is divided into four parts, corresponding to Spring, Summer, Autumn, and Winter, with the usualrecitatives, arias, choruses, and ensemble numbers. On this occasion we performed the latter half – Autumn and Winter.