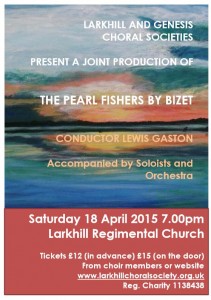 This was a joint operatic production greeted with great excitement by our choir and also Genesis Choral and sung consecutively in each other’s locations under the direction of our joint Musical Director Lewis Gaston. The story derives from two vows. The first occurs before the opera starts, when Nadir and Zurga were boys. They fell out over being in love with the same girl, Leïla, and as a result they made a vow of friendship to forget her. The second occurs years later when in the opera, Leïla makes a vow to stay pure and be a Priestess of the Brahmin temple. By falling in love with each other, both Nadir and Leïla break their vows.

Four brilliant soloists and ten musicians supported this challenging production.  Reviews from both audiences were of two outstanding evenings and probably the best they had ever experienced from our two choirs.

Welcome to Larkhill Choral Society. We are a very friendly choral society and welcome new members. We sing a variety of music from classical through country and folk songs to occasional jazz and spiritual songs. There are no auditions. We encourage